Skills focus: Speaking, vocabulary and general communication.
Requirements: A number of vocabulary cards to line up on the floor.

Hop and say is a pretty easy game to play. The teacher brings a number of flash cards to class and lines the cards up across the floor in a row. Two teams stand at the extremes of the row. When the teacher orders the game to start, the first student from each team starts to jump on the first card. Every time a student jumps on a card s/he says what is on the card-For higher levels ask them to make a sentence with the word on the cards. Eventually s/he will meet the other team player somewhere on the row. When the two team players meet, they have to do the old guessing game of ROCK, PAPER & SCISSORS . The student who looses the Rock, paper & scissors game of chance, leaves the row and goes to the back of his or her team’s line up. Another player in his/her team restarts the game for their team. It should be such that the next team mate in the line up should be ready to start immediately when s/he realizes that their team player has lost the stone paper scissors guessing part. The idea is not to let the other team player get to the end of the row. If the other team player gets to the end of the row, his / her team wins.
Tips: Don’t know how to play ROCKS, PAPER & SCISSORS? Read here. 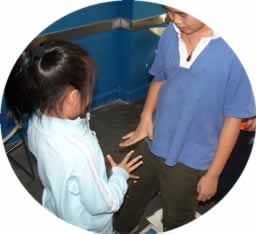